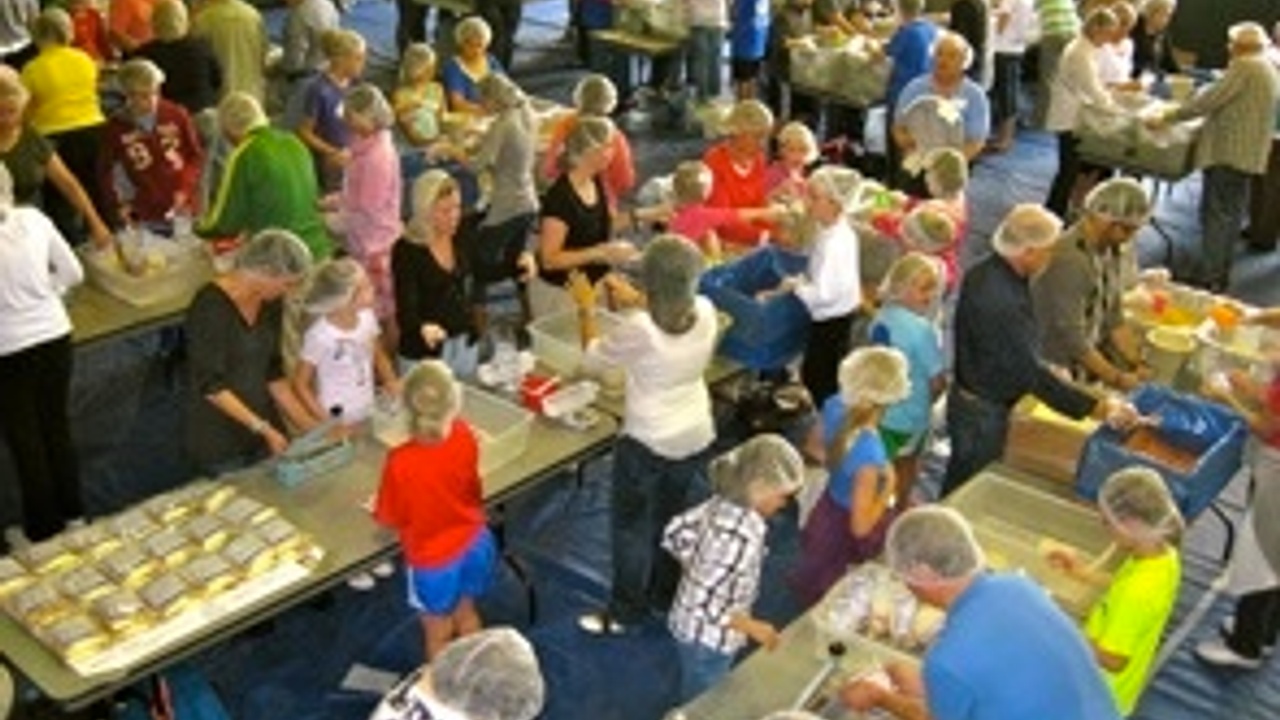 My dad and I went in front of the door with the other people at the Kids Against Hunger building. We gathered around the other scouts and waited for a staff member to come.

“Okay, everyone,” the staff member said, “keep your hair nets or hats on at all times and no phones allowed in the packing room.”

“Can you bring in a calculator?” I asked.

“Hmm…maybe not the same for a calculator,.” she replied.

“Do you travel with a calculator?” someone asked.

When we entered the building, we put on our aprons and our hair nets if we did not have hats. We came into the hall and turned it into a stream. Along the walls were photos of other scouts. I think there were a thousand of them there.

We entered the packing room with the promise to keep our hair nets on at all times and to keep the room phone-free. Another staff member came and gave us a presentation related to Kids Against Hunger. She told us about how everything worked and what each person's job was.

We strolled to our group tables and got to work. I had to switch roles in between. If we were going to weigh the bags of food, it had to be between 390 and 396 grams. And you had to be at least 10 years old to weigh the food. Well, unless a parent was watching you, I think. 400 grams would cause problems on the planes. The staff members wouldn’t be so pleased when they found out that a 400-gram bag had popped on the plane and distracted the pilot and crash-landed the plane. Each weighing scale had this basket on it that kept the weight at 0 grams. If you took it off, then the weight would be -40 grams. Near the scales you could see a bowl of food with a spoon in it. If the bag was underweight, you had to put food from the bowl in it using the spoon. If it was overweight, you had to take out the extra food and put it in the bowl. Even if you go for 389 grams, you still have to fill in the missing gram. The same goes for 397 grams. I did not actually do too many grams.

During the meeting, I had to be in charge of the bags, which were flat at first. Some kids had to multitask during the meeting, and I was one of them. In other parts, I had to be in charge of the ingredients. Each of which was labeled with a number from 1-4. Ingredient 1 goes first. Then 2, followed by 3 and 4. You can’t put your hand in the bag to open it. You have to put your hands on either side of the bag and move ‘em back and forth until the bag unsticks and opens up. This is how they inhibit the spread of germs. Putting your hand in the bag can contaminate the food. So they REALLY want to regulate the spread of germs. And they REALLY don’t want to make ANYONE sick.