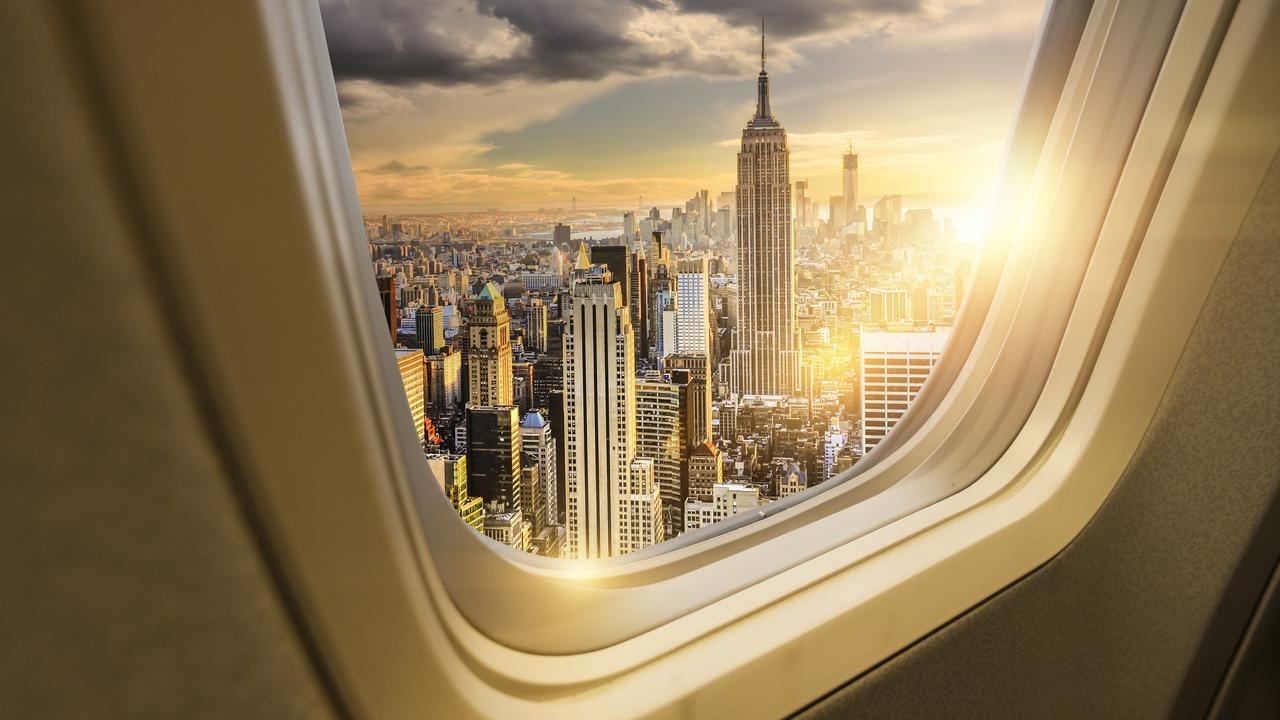 The speaker sounded, the captain’s voice sounded out, “We are now arriving at New York City. ” I squeezed past the crowd of people who were murmuring words that I could not hear. There were gasps of awes, which urged me to go to the window even more. I opened the shutters and staring back at me was a bunch of bright tiny dots like lights on a christmas tree. Heavy breathing was following behind me. “Hey let me see! You already had 10 minutes,” Grace said in a hushedtone. I heard clicking coming. It became louder and louder. “Please get back to your seats. The plane is about to land,” a flight attendant said. We hurried back to our seats.

The plane landed and we got off. Suddenly a rush of cold air, I saw the line of people wearing puffer jackets and scarfs wrapped tightly around their face. There was a mother scolding her son for not wearing his scarf. The chatters of the people blocked most of the sound from my ears. “Hurry up Emma!” my dad called out. Lagging behind  had cost me, and I ran towards them dragging my suitcase. The backpack on my back went up and down with every step. The weight of my suitcase slowed me down. I had never been an athletic type, so once I got there I was wheezing like an old man. This was commented on by my brother which really didn’t help with my bad mood already because I was running to catch up. I commented back on how he looked like a black version of a marshmallow tire guy. I hastened to wear my puffer jacket. Our dad found us a taxi within 10 minutes. Our breaths admitted small clouds of fog. Our hands shivered in the cold. My hands felt like they were going to fall off. The warmth of the taxi warmed our cherry-red faces and our numb hands. The taxi driver, a tall and black-haired guy, went outside to help load the luggage with my dad.

The sign of our hotel shone bright as a star in the night. My father thanked the driver and paid him the money. The taxi drove off then was enveloped in the darkness. We hurried into the hotel, the cold getting the better of us. “Your room number is 406,”the lady at the counter informed us. “Thank you” we all said simultaneously. We did all of our necessities for bedtime. Everyone murmured their good nights. I closed the bed light and the darkness became complete.

The alarm clock sounded. I used my pillow to cover my ears which muffled the sound. Soon, another thing woke me up: my brother started to shake me. I softly hit him in the stomach, and ow ow ow was that all I could hear. “Apologize to your brother,” my dad demanded. “I will not and plus I didn’t even hit him so hard,”I said back. “Do it now!”my dad demanded in an even angrier voice than before. “Ok Ok fine sheesh,” I said under my breath. “Sorry,”I apologized. “It’s ok,”my brother said back.

The sky began to darken, after we finished eating, so my dad called a taxi. This time the taxi driver was a short plump man with an almost balding head. The warmth felt like eating an ice cream cone on a hot summer’s day. “Hurry up,” my mother said to me. After taking a shower, I opened the television to see what was on, and it was Nickelodeon. After everyone was finished taking a shower and changing. I turned off the lights. I could hear everyone muttering good nights to each other. I could hear the sound of my dad’s snoring.

It was finally our last day in New York City. I couldn’t bear the cold any longer. My patience was on the edge. I could lash out anytime. It was our last stop the MET Museum. We took a subway there and walked the rest. It didn’t take very long. After an hour, I started to complain how boring it was. “Please be quiet,”my dad said. After finishing looking at the boring artifacts, we went to the gift shop. I bought a book about art. I suddenly realized that I had not seen anything at all. We went back to the hotel  and packed up. My dad called a taxi, and we drove to the airport .

Once we got outside to the airport. My dad paid the driver, and we headed off to the doors. The two big doors slid open before we got there. The chatters filled the air. The signs had pictures of the Statue of Liberty and a picture of the MET Museum. The chatter of tourists filled the air. I heard words like “awesome trip” and “amazing trip.” Did I really not see anything at all? Not even all of the beauty of New York? The atmosphere around me became more dismal as we headed for our gate.

On the plane, I thought about how I could have seen much more of New York if I wasn't complaining. The only solution was to look at the pictures my dad took of New York. I opened the window and took one last glance at New York City.