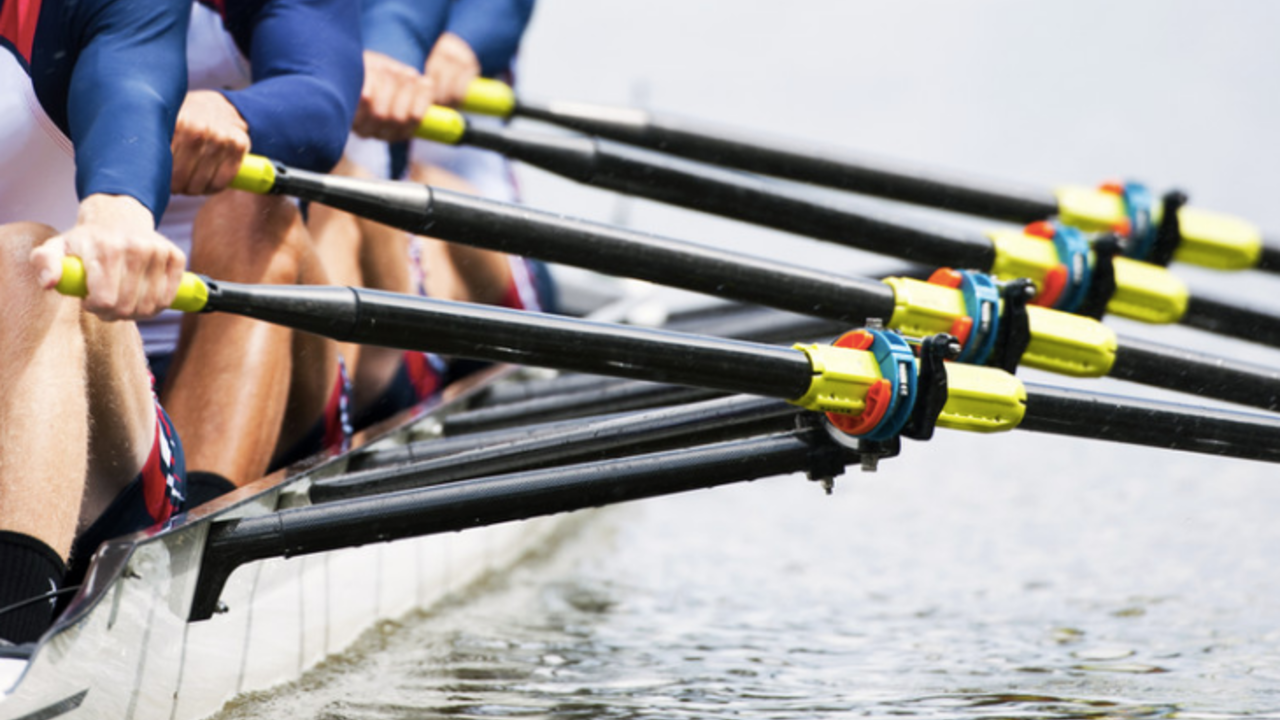 By Vincent
Day 1
I remember my first day of rowing very clearly, it was in July 2020. I was 11 at the time, and covid sucked. I just arrived at rowing. I recognized the place from driving past the place like a million times, the boathouse had blue paint, with a green sign with big yellow letters on it saying “BOAT HOUSE” The other building where they stored boats, oars, and slings, was a big brown cabin, with long metal bars sticking out, with boats on them. Boats of all colors, there were red, blue, white, orange, grey, and more. Two carved wooden prisms were curved in a circle shape with openings at the top so that it could hang boats. There were also many racks along the road and two big trailers with the metal bars in the same shape as the one in the boathouse. Boats were everywhere, they all had metal rods sticking out of the side, around the middle of the boat. Each boat also had a ball on one end and almost all of them had writing near the ball, which I assumed was the name of the boat. The was also a lot of construction taking place. There were huge machines dumping dirt everywhere. There were four girls, each taller than me. Which made me even more nervous. There was also a boy that looked like he was in high school, which made me feel even more nervous because everyone was older than me. He already had hair everywhere. My stomach started feeling like butterflies were fluttering around in it, and I started imagining several scenarios where everything could go wrong. I would have bit my nails except my mask prevented that from happening. I walked to where they were, put on some hand sanitizer, and awaited further direction. I thought that I would see some of my friends there, but I found out that they were mostly in mods and that I was in Learn to Row, which made me want to get into mods. I then took down my oars. The dock did not have much support, it was pretty much just a bunch of connected floating wooden squares. There was a great view of the river. Along the river were a lot of houses, almost every one of them had a huge ladder leading down to the river with one or two boats. The girls were chatting, but I stayed silent. We all played an introduction game. Everyone stated their names and a fun fact about ourselves. It turns out I was the only 6th grader there. The four girls were all in 7th grade, and the boy was in high school. The girls were named Caroline, Hannah, Meredith, and Annika. The high-schooler was named Peter. It turns out he was voluntarily coaching us. Later, we were all told to pair up and take boats down. The boats The girls split into two pairs and the high schooler, named Peter, took a boat down by himself. Since I started a week later than everyone, they went rowing while I watched a safety video and learned the basics of rowing on a rowing machine. Then I took a boat down with Coach Shawn. He took the side with the ball, and I took the opposite side. I was in the trainer, which I heard was impossible to flip, but with it came bad things. The trainer was one of the heaviest singles there. While carrying it, the sides dug into my shoulders with a lot of force, and what made it even worse was that I was pretty short compared to Coach Shawn and so the downward force on my side made it hurt even more. We eventually reached the dock after what seemed like a long time. We then set the boat next to the dock. I put my oars into the boat.
Then, Coach Shawn pushed me away from the dock, and I started rowing. Coach Shawn taught me a lot of things, and we did a lot of drills. After I got the hang of steering, we started doing drills. I also saw a deer. We started with a “pick drill”. In the middle of the drill, Coach Shawn Suddenly said “Way nuff!”
“So does that mean to wait?” I responded.
“Yes,” said Coach Shawn.
Then, he taught me starboard and port which he also yelled a lot of. Then we did “cut the cake” after, we did some “5 and glides”. Then he taught me how to do a “domino”, which is where you lie down on the boat, which was fun. It helped with being aerodynamic so it was good for gliding. Then rowing was over. My dad drove me to the town pool right after so I could take a swim test. There were two other people there who were supposed to start rowing next week. The first part of the test was swimming three laps back and forth in the pool. Since I did swim team, I finished way before everyone else and relaxed. The next part was learning how to put on a life jacket while in the water, I floated around while waiting for everyone to finish. When it was my turn, I put on the life jacket with ease and the test was over. I did two dives after. I did a dive first, but I messed up and my legs went in front of my head a little bit and they splashed onto the water. Next, I did a cannonball, splashing everyone within six feet of me (which was no one). And then I went home and ate lunch. And so my first day of rowing came to an end, but afterward, the days just kept on getting better and better with some minor bumps in the road. So that shows you that trying new things is always good.