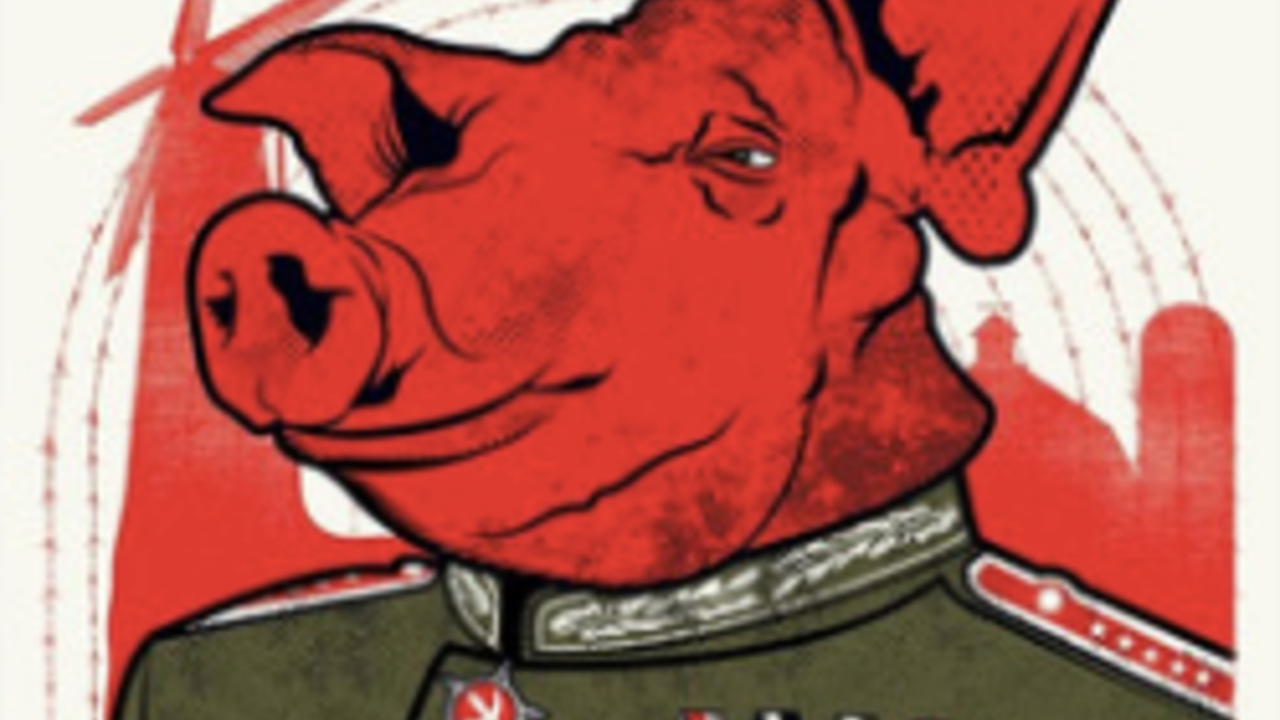 By: Charles Xue
9/10
Animal Farm, a novel by George Orwell, tells a story about a group of animals living in Manor Farm, a farm in England run by Mr. Jones. One night, the animals gather to listen to a boar named Old Major talk. Old Major is widely recognized as the most intelligent animal on the farm. He tells the animals that they should revolt against Mr. Jones. Sadly, Old Major dies just three days later, but the spirit of revolution is not lost. One night, Mr. Jones forgets to feed his animals, and the animals break into the storage shed and start eating from the bins. Mr. Jones arrived minutes later, whip in hand. Instead of attacking the animals, they attack and drive him off of the farm. The pigs pronounce themselves as the new leaders of this farm, and for a while, things go well. However, the pigs gradually become more self-serving and corrupt. They do things like selling their hardest-working horse to a glue factory to buy whiskey, making the animals work hard on an electricity-generating windmill that only they were allowed to use, and reserving the best foods for themselves. At the end of the book, the animals can no longer distinguish a difference between pigs and humans.
One of the best parts of Animal Farm is the author’s clever use of metaphors. Orwell uses conventional metaphors such as “a stormy debate” and “never lost heart” to make the book more colorful and exaggerate certain things. He also uses much deeper metaphors, such as the use of alcohol, to make us reflect upon the book. Alcohol is used as a metaphor for corruption. In the beginning, Mr. Jones is very drunk, and very corrupt. This holds true for the pigs too. The more they drink, the more corrupt they are. In fact, the entire book is a metaphor for the Soviet Union during WWII. Each character in the book represents a person in real life. For example, Napoleon represents Stalin while Snowball represents Trotsky. The use of metaphors make the book more enjoyable and gives the book multiple layers.
Another one of the aspects that makes Animal Farm such a great book is its unique characters. In the beginning, the pigs are portrayed as heroes, taking on the undesirable job of leadership to improve the animals’ lives. However, the author leaves hints that the pigs are not as honorable as they seem. For instance, when Boxer injures his leg and is unable to work, the pigs tell the animals they sent him to a veterinarian. However, the animals who could read see that the back of the cart he was pulled away in had the logo of a glue factory, not a veterinarian. Eventually, the pigs become so much like humans, the animals can no longer tell the difference between the two. Hence the last sentence: “The creatures outside looked from pig to man, and from man to pig, and from pig to man again; but already it was impossible to say which was which.” This unique plot makes the book interesting and entertaining.
The final aspect that makes Animal Farm such a great book is its surprising plot twists. For example, the windmill falling over is a huge plot twist. The animals work so hard on the windmill that the reader could only feel hopeful that the windmill would work. Although the windmill falling over is a big surprise, the most shocking surprise comes a bit later. Using the destruction of the windmill as an excuse, Napoleon (the leader) executes his enemies, ignoring the fact that one of the seven commandments is that no animal shall kill another animal. This event is the turning point of the book, when the pigs start to become horrible leaders. These plot twists will keep readers engaged until the very last page.
Animal Farm is definitely worth reading. Orwell cleverly uses metaphors in his writing, using conventional metaphors to add to his story while using much deeper metaphors to make us think and reflect upon the story. Furthermore, Orwell creates interesting characters all with different qualities and goals, such as Napoleon, the corrupt, power-hungry pig and Boxer, the hardworking but submissive horse. Finally, Orwell includes plot twists that will keep you on the edge of your seat, and wondering what will happen next. By combining a clever use of metaphors with interesting characters and an intriguing plot with even more intriguing plot twists, Orwell has created a masterpiece of a book.